How To Increase Your Health And Vitality..

In  7 Simple And Easy Steps

Kefir – Do you have the guts? 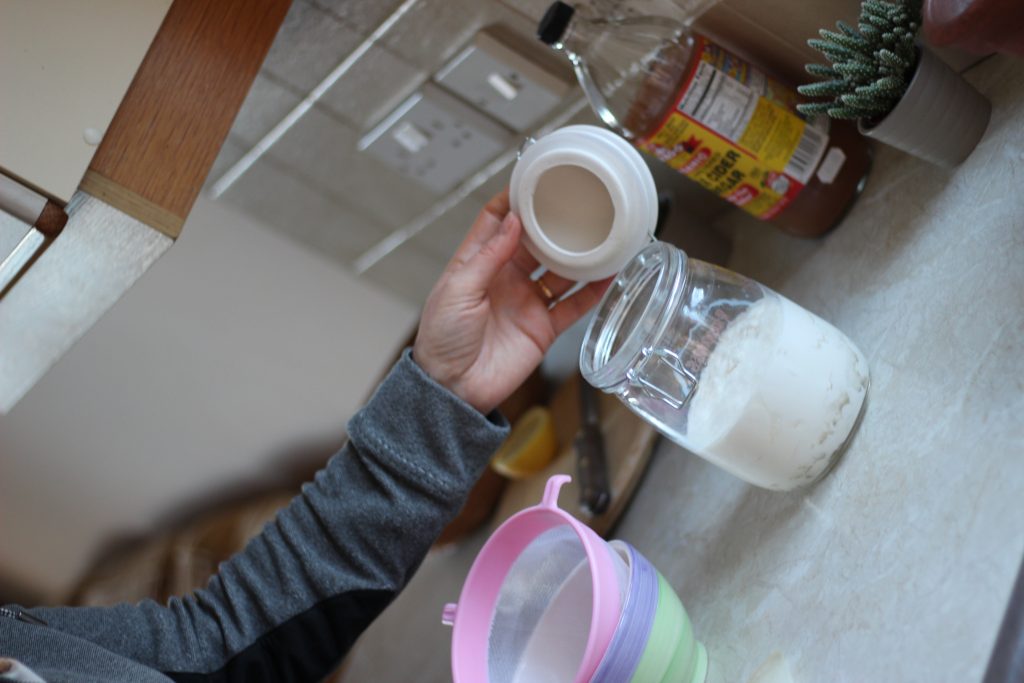 For some time now I have researched and read about KEFIR and the health benefits associated with it. I have always known the importance of good gut flora for overall health but I struggled with the idea of adding Kefir to my diet and that of my family as well as recommending it to clients. Why? Because of the Dairy. For 20 years we have avoided dairy products because of the health problems it was causing our family, which had resulted in asthma. Now I was actually considering adding it back into our diets but in its RAW form. The end product however was going to add a lot of health benefits and I was being slowly persuaded.  I choose raw cow’s milk rather than goats or sheep’s milk as it was easier to source locally. Yes I could have chosen water, or coconut milk but “my gut” was telling me to use cows milk despite everything I believed before and 2 months later this is how I have grown it and this is what I found…. 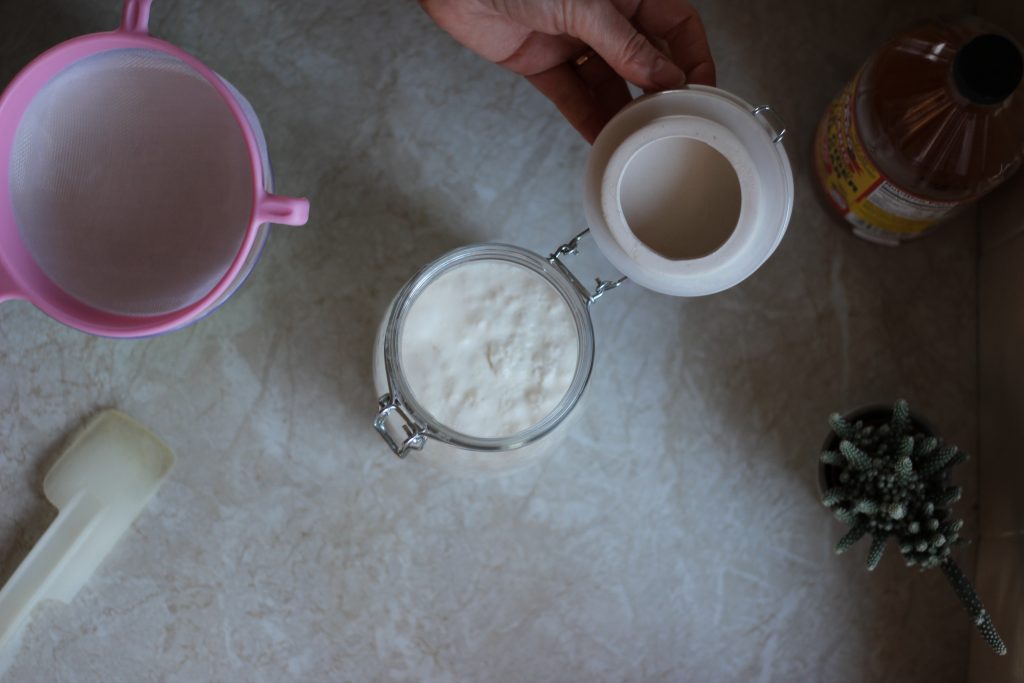 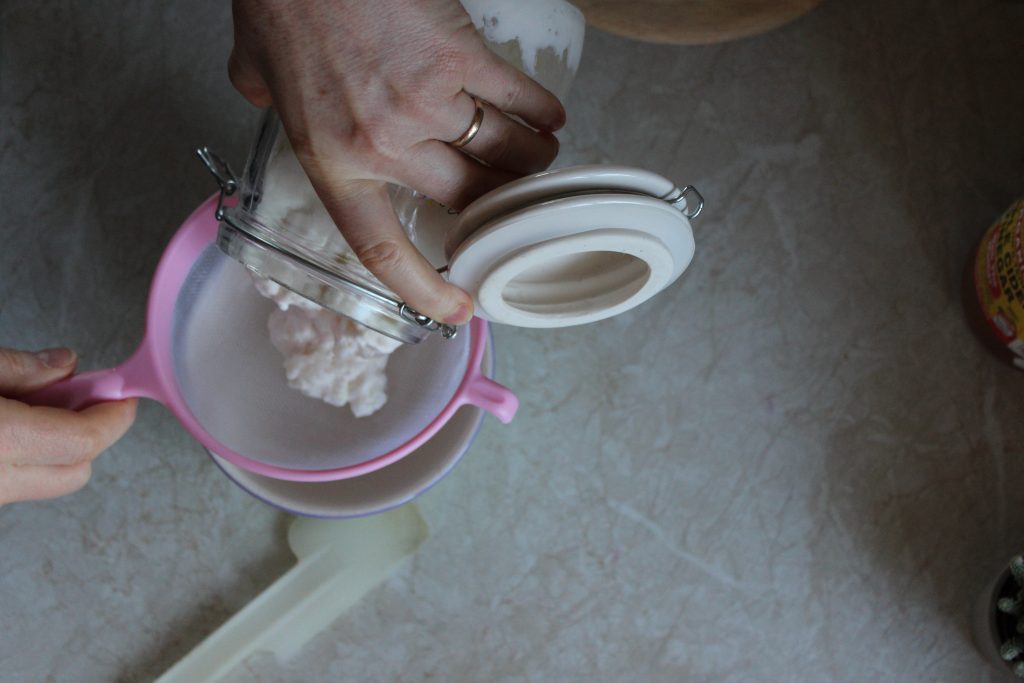 As a colonic therapist I assist people to detox and cleanse old toxins and impacted waste from the colon. An even more important role is to replace the good bacteria that has been killed because of the toxic waste overload over the years. There are many probiotic supplements on the market and they are beneficial. However, if you replace the good flora in the gut with natural fermented foods, surely this is the way mother nature designed health to be. Since 75%-80% of our immune system is in our digestive tract, which makes it the focal point if you want to have great health. Hence the personal challenge to discover if Kefir would prove to be the most effective and cheap way of getting a healthy gut and boost the immune system.

Kefir is a living organism and can be grown as a fermented milk product (cow, goat or sheep milk) that tastes like a drinkable yogurt. You can also grow kefir on water, coconut milk or coconut water.

Some of the beneifts.

A friend had been growing Kefir and said he would divide some of the culture if I wated to start using it. That was 2 months ago. Hence the process of growing this weird “cauliflower” substance in raw unpasteurised cows milk began. 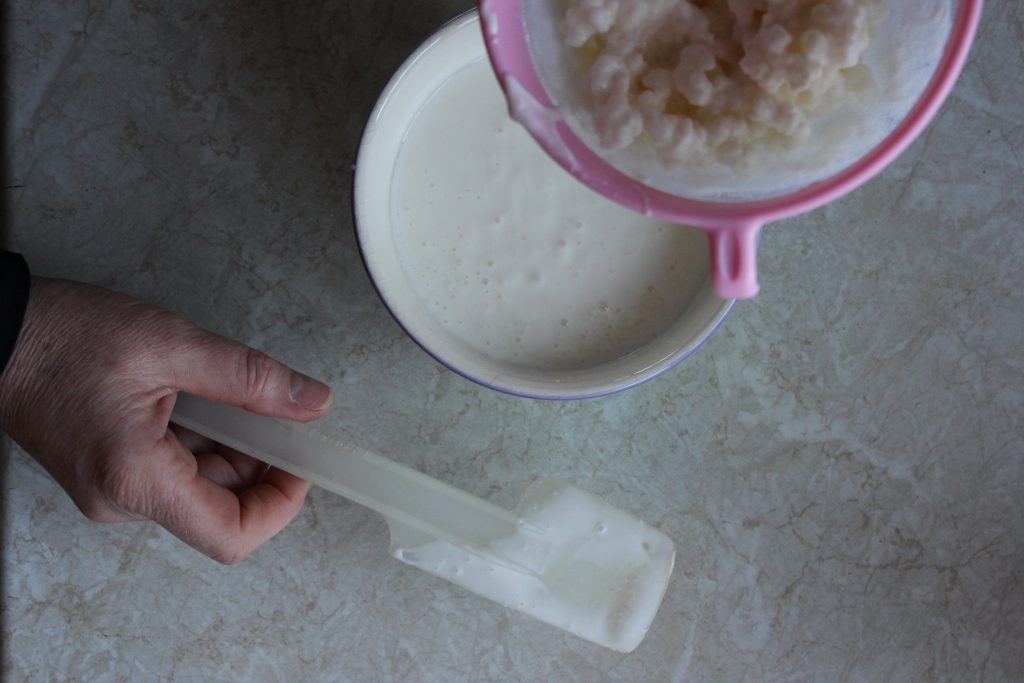 I used all glass and plastic materials. No stainless steel or metal as this destroys the culture. I left it for 24hrs and strained the milk from the “cauliflower” like culture. I placed the culture back into the glass jar and covered it with milk and then closed the lid, but not tightly and set it in a dark cupboard. Then I stirred the thick liquid to leave a creamy yoghurt like mixture. 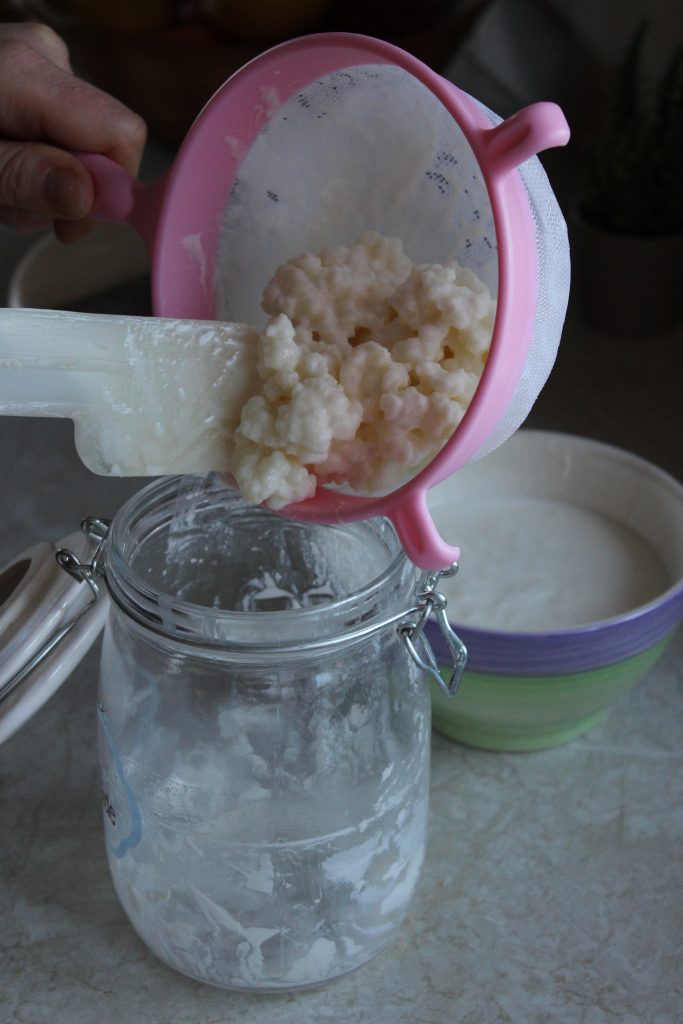 The kefir grains(“cauliflower”) can be replaced back into the jar and covered with the raw milk. The kefir can be left up to 2 days before straining. It allows the yoghurt to become more creamy. 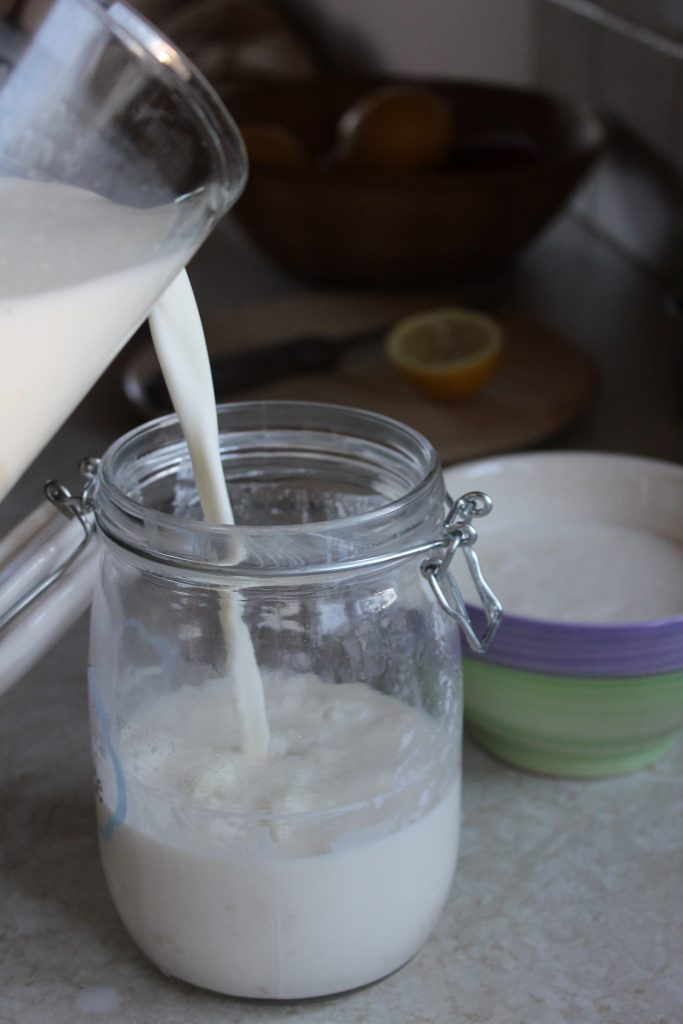 The yoghurt can be added to smoothies, or chopped fruit, or eaten plain. I usually have berries, mango, apple, walnuts, golden linseeds, chia seeds and a cacao powder. 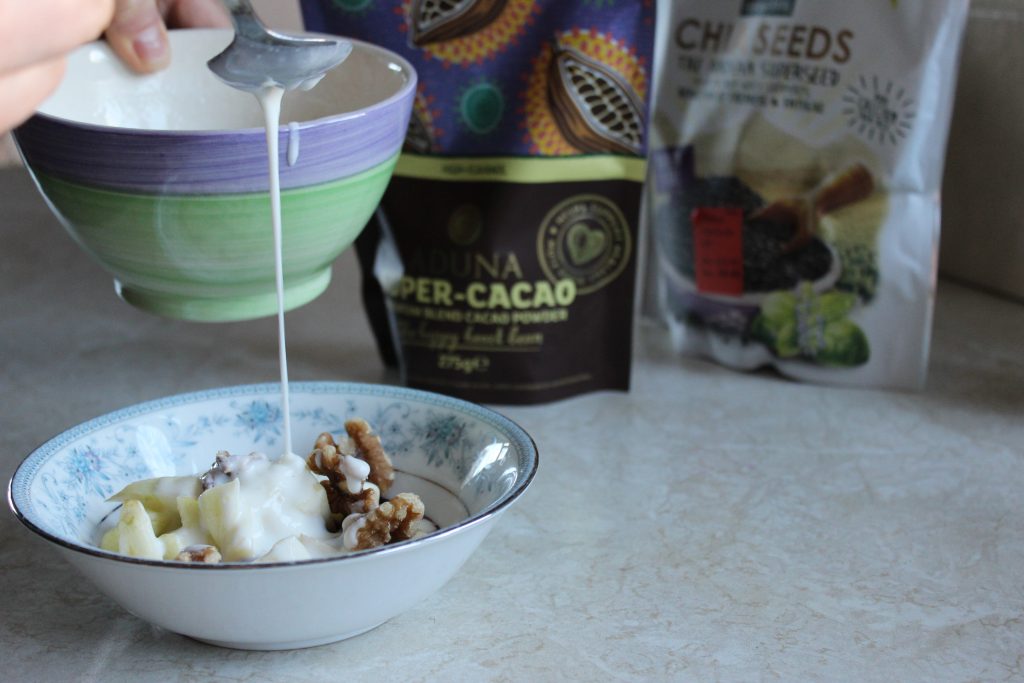 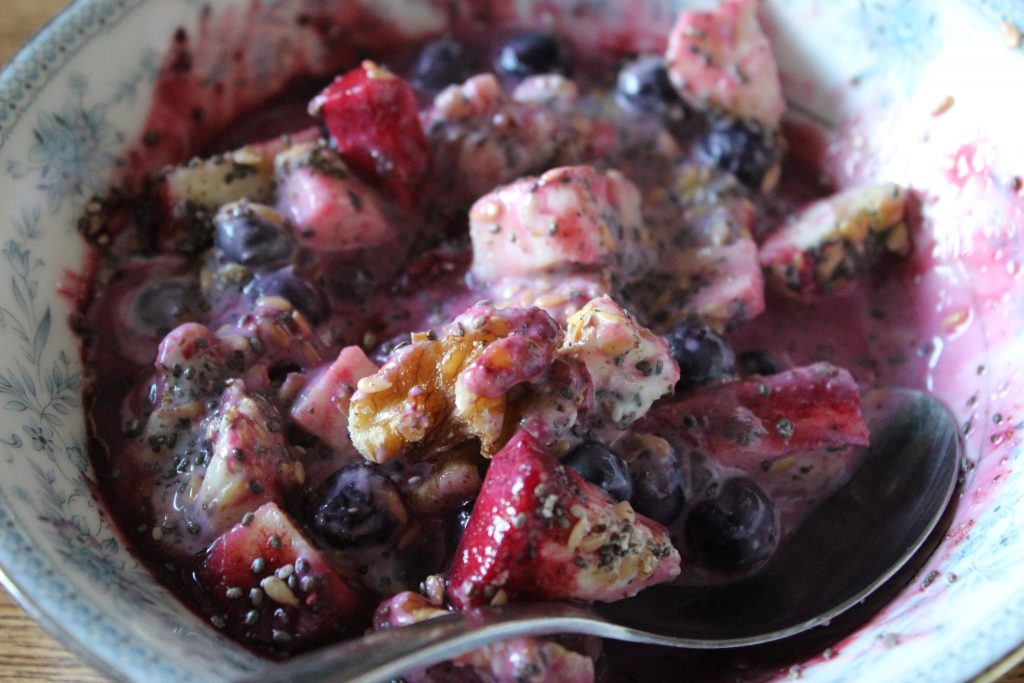 When I started using the Kefir I took it every other morning until my body got used to taking dairy again. I was quite amazed I had no side effects from taking the milk (don’t know what I was expecting!!!)  After an initial 2 weeks I began taking it every morning. I feel it has really helped my digestion, no bloating or discomfort which I would have experienced in the past from taking milk. The fermentation process changes the chemical composition of dairy products rendering it relatively low in lactose.  An enzyme, B-galactosidase  – which is essential to digest lactose – is present in the microbes in the fermented milk, according to researchers at Ohio State University who published their results in the Journal of the American Dietetic Association. Some bacterial cells die in the intestinal tract and release the enzymes that digest the lactose. It is suggested that microbes in kefir may be able to colonize the intestines and benefit health by shielding them from harmful disease-causing bacteria. So if you are lactose intolerant then add a little kefir into you diet to see how well you tolerate it.

Overall taking kefir has helped our whole family and I would recommend it as part of a balanced diet. It is a cheaper way of getting live bacteria into your digestive tract and relatively easy to look after.

Important facts about estrogen. How the body is breaking down estrogen levels and safe ways of measuring this.

Dr Richard Schulze. All About the Bowel